Next up will be our 1st team top performances.

Each individual will get his own spot.  We will start with #11

Email ThisBlogThis!Share to TwitterShare to FacebookShare to Pinterest
Labels: Honorable Mention of top performances for 2013

Top Players of the Game:

Top Players of the Game:

The 2010 football season was the last playoff team Plainfield had.  One of the main reasons was the performance of Dawud Hicks.  Hicks more known for his grappling skills was a major force on the Cardinals Football Playoff season.  Dawud would finish the season as the Cardinal Fanatic top star earner for the Cardinals.  Here is a look back at Dawud's player of the game notes:

Plainfield vs Somerville
After giving up 56 points in their game opener, the Cardinals responded with an exceptional defensive effort by shutting out Somerville led by Dawud Hicks, DaShawn Robinson, and Tiaquan Womack. The defensive effort was punctuated with 4 stops in 4 attempts on 4th down.

Plainfield vs Union
Plainfield pulled off the biggest upset in several years as the Cardinals defeated the Farmers of Union 14 - 7. The game was nearly a shut out but Union scored with less than 2 minutes in the game. Kell'E Gallimore played an all around outstanding game. His quality punts, interception on defense, and the Cardinals 2 touchdowns led Plainfield to victory. Dawud Hicks led the Cardinals on the defensive side with 11 tackles, 2 for negative yards.

The Cardinals defense has put back to back impressive showings. Another interesting statistical note, Union went for it on 4th down 3 times. The Farmers were successful once. The Cardinals have turned away their opponets 6 out of the last 7 attempts on 4th down. The Cardinals also went nearly 8 quarters of shut out football.

This was the best execution the offense has demonstrated all season. Although this game could have easily seen the Cardinals score at least 28 points. A couple of deep open touch down passes were dropped. The improvement in offense is taking strides.

The defense will be tested when the Cardinals go to visit the Elizabeth Minutemen and their high octane offense.

The offense should continue to take positive steps as they face the worst scoring defense in the conference. 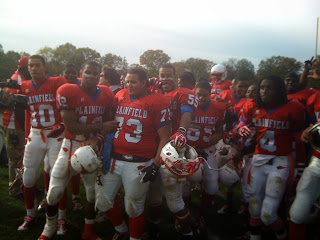 Diijon Allen-Jordan threw for 120 yards but his performance was offset with 3 interceptions.
Deion McNeil caught a 40 yd TD pass from Allen-Jordan for the Cardinals only score. This was McNeil's 3rd TD reception of the year.
Delano Mullings was hurt on his first rushing attempt and was side lined for the remainder of the game.
Seniors Tiaquan Womack and Dawud Hicks will be missed for next season. Both grapplers combined for 25 tackles with 3 for negative yards.
Both Tiaquan and Dawud should earn post season accolades.


To big Dawud (father) and family, please accept my Condolences

The Cardinal Fanatic...
Posted by Noel Pyne at 5:51 PM No comments:


Plainfield faced both teams and the outcome was not very good as both teams took my Cardinals to the woodshed and did a number on them.


According to my computer geek next-door neighbor, Jimmy Neutron, both teams were expected to make it this far.  Jimmy said that he is a perfect 6-0 with his predictions so far and this game will be the only one he predicts that can go either way.


Jimmy is telling me that Union has thrown a funny bone into his computer program.  The Cardinal Fanatic responded by saying you must be talking about Jamauri Bogan rushing prowess.  Jimmy tells me NEGATIVE. Jimmy explains the surge of outstanding linebacker Jabree Robertson has caught teams off guard.  The Cardinal fanatic already knew that Robertson was a talent on the defensive side of the ball but Jimmy explained that Robertson has exploded on the offensive side of the ball in the latter part of the season.  Especially against Plainfield when Bogan went down with an injury.  The old cliché of Thunder and Lightning is back.  The 200lb Robertson is strong and is the perfect compliment to the speedy Bogan.  By the way Robertson is equally as fast as strong.  Jimmy said that this new revelation has caused his computer program to crash.


Jimmy further explains to further complicate his prediction; Ridge is running like well tune Mercedes 600.  Powerful but smooth, strong but fast, cruising but punishing.  All this equals a dominant team but Jimmy did notice a few flaws in the armor of the Red Devils.  An excellent team with excellent skill players and very good offensive line but the teams that gave Ridge a battle (Linden and Westfield) both had very good interior linemen.  Union’s interior line of Kameren Stowe, Moses Jean-Louis, Uchenna Egwuonwu and Mike Seraquaize have not only caused havoc on the suspension of the buses they travel on but the combine weight of over ½ ton linemen have been a force.  Ridge will counter with arguably the best quarterback in Somerset County and Mid-State Conference in Connor Hughes. Hughes can win this game with his arm, legs or feet.  Not only is Hughes the best quarterback he may also be the best kicker in the conference.  With this game seemingly so tight on paper, it may come down to the legs of Hughes.  Jimmy also explains the skill players for Ridge execute well.  They are all above average athletes that execute better than any other team in the conference.


Ridge’s co-captain Nick Franzese is a threat through the air.  Excellent hands and has been proven to be a lethal weapon through the air for Hughes.  Chris Mueller is a force on defense and will surprise teams on the offensive side of the ball.  At 6’5” 220”, Chris will be a load to handle.  The backfield of Matthew Soulas and Liam Derkasch will be looking to counter Bogan and Robertson. AJ Peterpaul will be the leader of the front line and has the tall task of nullifying the strong front line of Union.


With that all said Jimmy reluctantly explained that Union can pull this game out based on their strong play down the stretch of the season.  Jimmy feels Robertson will be key for Union to win.


But Jimmy feels that Ridge is the favorite.  Hughes and Franzese will be key.  Look for Hughes to win this game with his arms, legs and ultimately his feet.

Noel Pyne
A Plainfield fan since the mid 70's.